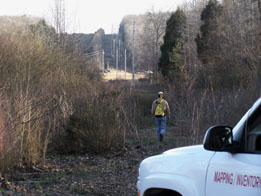 Traditionally, a technician who was charged with mapping a utility system would need to drag out a measuring wheel and a paper street map. The technician would select a pole or ped as the starting point, then locate and draw it as accurately as possible on the paper map. Then, the technician would wheel the distance to the next pole and draw this pole's location to scale on the map. He would map the entire system in this fashion. Once back in the office, the technician would draft this information onto paper or into a computer aided design (CAD) program.

The wheel measurements were not very accurate due to bumps, swags and other obstacles between any two points. Over long distances, these small errors would add up. This caused the overall footage to be inaccurate and also led to disagreements between the collected map and the underlying street map. For example, a pole physically located on a street corner might be scaled to the middle of a street.

The first improvement to this procedure came when a laptop computer, running a CAD program, was taken into the field and used in conjunction with a laser to create the map. This put point collection in the 3D world. Since the map was drawn on location it was finished when the technician left the field. The degree of accuracy was improved since there was no data transposition at the office.

The second advancement involved the development of software to use real-time differentially corrected GPS and a laser. The system works somewhat like a total station, using gps for control position, but has the ability through proprietary software to automatically draw point features into a cad program in real-time. The system allows attributes to be added (any feature descriptive information), directly into cad or a gis system such as ArcGIS, automates text placement and calculates the 3D distance between poles. The mapping system efficiently couples the submeter accuracy of real-time GPS and the graphics capabilities of CAD for collecting feature information from the field, i.e., utilities of any kind. It is capable of gathering any GIS related information, placing road centerlines automatically into CAD, addresses or any other ground truthing information required.

The name of the system is RTmap, developed by Neal Technology Associates of Scottsboro Alabama